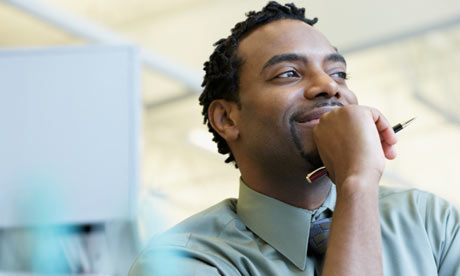 Often in dystopian fiction, society functions as a hive where worker bees maintain a strict,  high level of production for the good of the colony. In Nineteen Eighty-Four, for example, Winston’s colleagues are more hell-bent on succeeding in their professional lives than maintaining a personal one, mainly because it would be too risky to develop a personal life at all let alone one that would be gratifying. But would this kind of attitude really bring down a social standing? Is having a sense of pride and communal hardship not an integral part of being a well-rounded, contented individual? For a more negative slant on day-to-day life, would it not be a lack of drive and purpose that would bring about a dystopia?

Obviously due to the recession many people are literally unable to work, but it’s not only the workload itself that appears to be in poor health; our work ethic is also incredibly feeble compared with previous generations. Retail chains have always been known to squeeze out as much as possible from their employees for as little as possible, but now it seems as though many other areas of employment are behaving in the same manner. As a reaction to this, employees wish to do as little as possible for as much as possible, for if you do not stand your ground these days then you will be taken for a fool. The world is too tired and too poor not to think ahead.

I was at a swimming pool recently when I heard some cleaners moaning about the threats that had been made to them by their boss. “He said if we don’t finish the whole changing room by the end of our shift, we’ll have to stay late without pay,” one girl said. “!&$£ him, I’m not doing that. I’m going to go home when my shift ends and because he’s so rude, I’m going to do as little as possible. He can shove it.” Words may have been altered and masked, but the jist of it is still there.

This is a terrible attitude from both parties, and it means that the business will suffer in more ways than one. The employer had the right to want a certain level of cleanliness for the changing room, but the employee also had the right for a considered, reasonable time period in which to finish the task. To demand that an employee stay in work for zero payment until something is finished is beyond terrible management, and it’s incidents like this that make it clearer why less and less people opt to work and decide to sign up for benefits instead. Who wants to be demeaned and worked to the point of exhaustion for half the amount of money that an ignorant, selfish manager would receive? The changing room thus remains dirty, and therefore there will be a reluctance to return felt by the swimmers and a reduction in money for the business as a whole.

Our lives are becoming more dystopic as society disintegrates into selfish individualism. We are pack animals, and it won’t be long until a world full of lone wolves meets with a disaster due to cold, unfeeling laziness. It’s a terrible thought, but the only thing that could bring us back together as a species would be for something destructive to happen. Perhaps Big Brother’s idea of non-stop war had a point.