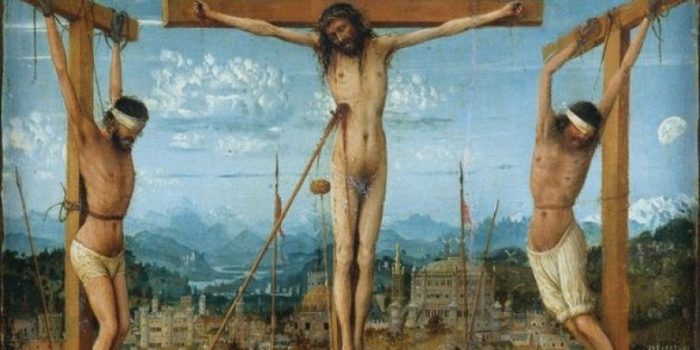 Ash Wednesday marks the beginning of Lent, an incredibly solemn Christian tradition that lasts six weeks until Easter Sunday. It is meant to be a time of repentance and general self-flagellation to show how sorry we are for being incredibly sinful human beings, but these days we tend to use it as a second chance to rekindle our New Year’s Resolutions.

Most give up chocolate, coffee or alcohol, but as a non-Christian I feel this to be a rather half-arsed way of participating. If you really want to purge yourself of sin before the rebirthing of Jesus, surely you want to do some genuine good over the course of that month and a half?

I have therefore compiled a short list of genuinely useful Lent ideas that could help improve your life beyond the shrinking of your waistline. Feel free to leave your own suggestions in the comments. The production of meat in western culture is arguably one of humanity’s biggest modern sins, as 30% of the earth’s surface is used to graze cattle and grow the feed that sustains them. Not only this, but approximately 75% of global production is fed to farm animals. With the vast number of starving people on this planet that seems a repugnant reality to be faced with.

It is widely known how cruel mass farming is. I don’t wish to provide too many facts on the subject as I hate researching such matters, but you only have to google ‘battery hens’ to see the appalling conditions that some animals are kept in.

Cruelty aside, eating less meat is incredibly beneficial for your health. The risk of getting cancer for those eating lots of red and processed meat simply cannot be ignored. There have also been many reports revealing the damage caused by consuming too much protein in the diet.

A seemingly inconsequential move, but giving up meat even for a few weeks will drastically reduce your carbon footprint (and conscience) as well as make you healthier, which is the whole purpose of Lent really. Give Up Giving Money To Charity

Donating your time, money and belongings is of course a very suitable activity for Lent, but mindlessly throwing money at charities that are nothing more than business corporations could do a lot more harm than good. Take the recent Age UK scandal for instance, where a charity has actively been wronging the people they are supposed to be caring for. The large sums of money that some charities deal with can cause serious problems when put into the wrong hands, which obviously has been the case with Age UK.

There have been many other scandals over the years where charities have shown to be disturbingly corrupt, but these sorts of stories are generally swept under the carpet after a short while. For instance, the use of the money raised for Red Nose Day was put into question some years ago but this has seemingly been forgotten about – and still these charities receive large donations from the public who are blinded from the truth by charitable guilt.

It is not wrong to ask where your money is going when you donate. This is not being uncharitable, or even un-Christian. For Lent why not raise money for a local charity where you can actually see where the money is being used? Give Up Social Media

My final idea for Lent won’t help many people beyond yourself, but it is still a great way to purge yourself of the negatives in your life.

Social media is a useful tool when it comes to socialising, business opportunities and education, but there is a point when you realise it has gone too far and you might need to take a break from it for the greater good.

This Buzzfeed article I read about Snapchat made me feel so uncomfortable that I deleted my account. Teenagers are seemingly talking numerous selfies every second of every day, but for what purpose? Why are they…or rather all of us spending so much time online just to see a rise in followers?

I myself am rather obsessive over Twitter and Instagram. It stops me reading interesting articles, listening to new music, daydreaming or talking to my fellow man. I fully appreciate it is a poison in my life that I am unable to stop divulging in and is generally crippling our society socially and spiritually.

At the end of the day would Jesus rather you ate less chocolate, drank less coffee or became a vegan, tight-fisted, friendless wretch like me? I’ll let you decide that one.