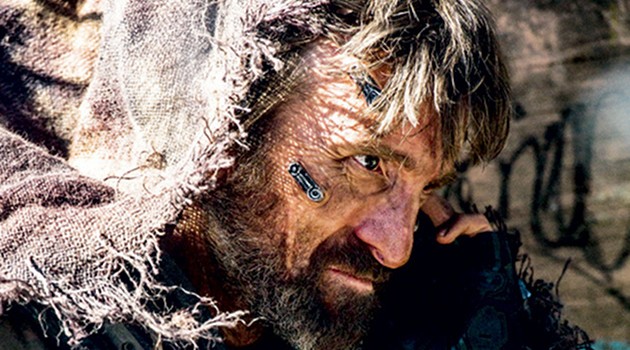 So, many of you may have already seen this movie as it has been out for a while now, but Elysium is this year’s dystopian blockbuster thriller featuring Earth as a third-world slum. The planet has been destroyed by overpopulation, pollution and generally being ravaged by humankind, and so the rich are forced to flee into space in order to preserve the life they are accustomed to. The ship that they live on is a mini paradise named Elysium (definition: place at the ends of the earth to which certain favoured heroes were conveyed by the gods after death) where there is no crime, no sickness and no reminders of the terrible festering rock that the rest of humanity have to live in. Obviously the folks back home are not at all happy about being left behind and continually try to smuggle themselves onto the ships flying to and from Earth, but peace remains as they are often murdered to death by the ship’s Secretary of Defence, Jodie Foster. Max (Matt Damon) is a down-on-his-luck former felon who tried to fly straight once but is forced back into the sordid world of crime when he endures a lethal amount of radiation at work and needs to cure himself with a machine on Elysium that heals all medical ailments. He has to try and get past Jodie Foster, her sick, twisted henchman (Sharlto Copley) while also struggling with his good guy/bad guy identity crisis… Yup, that about covers it. Oh wait, and there’s a childhood sweetheart and her kid thrown in the mix.

When breaking down the foundations of the plot there didn’t initially seem to be much of a comparison between this and the innovative District 9 (the director/writer’s previous feature), but as I watched Elysium I noticed a lot of strong thematic similarities. There is a clear influence of the Apartheid in both and the division of the fictional social classes mirror the stark differences between rich and poor in South Africa today. Basically, Blomkamp writes some really heavy and serious shit.

Well, it should have been heavy and serious and weighty, and I did like the idea behind the film, but it never delivered on the points it tried to make. There was just too much…stuff, just so much happening that no particular element was shown the love, care and attention it truly deserved. There was sufficient action to keep the story moving, a sufficient number of lame jokes to stop some scenes becoming too dense, and a sufficient level of acting to ensure that everyone paid attention to the important bits. Unfortunately, the bare minimum of a whole bunch of stuff makes a film merely passable, nothing spectacular.

I left the cinema feeling empty having been presented with characters that were feeble archetypes and a story that was better in the telling than the showing. There were some absolutely amazing effects (a face is blown off at one point with what I like to think of as spectacular accuracy) but there were also a lot of tedious shoot-outs, loud bangs, flashing lights and shouting. Dialogue was functional, costumes balanced between boringly realistic and uninspiringly theatrical… oh god, I feel a bit miserable now I’m listing all of this. I may have to stop now.

What I’m trying to say is that these days the summer blockbusters are trying too hard to entertain the masses. They have everything and nothing, proving all points from all sides and proving nothing at all. Elysium was District 9 but larger and smaller all at once. There were no flaws and no good bits, just a bunch of people trying hard to be it all.

The joy of watching a film is the aftermath: to argue about what was good and what was bad, giving an opinion and a point of view of what worked and what didn’t. Elysium wasn’t bad, I didn’t leave shouting and swearing about the tenner I just wasted, but instead I shrugged and nonchalantly commented on the weather.

It’s just the thing is, Hollywood, I want to shout. I want to swear. I want to love or hate you…why can’t you understand this any more? Why do you have to be so…liberal?