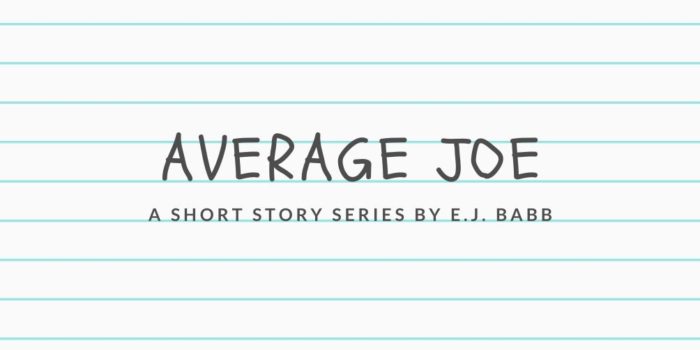 It was dark by the time I got home. The light outside my grandparents’ flat had been broken for months and I had to run my hand across the door to find the keyhole.

Inside the tangy, wet smell of old fat greeted me. Decades of burnt bacon, cheap joints of meat and boiled offal had infused into the fibres of the carpet and the paper on the walls. There was also a thickness to the air from the mounds of laundry hanging on radiators that were never quite able to dry. That flat always made my skin feel unclean, as if the dampness settled on me and clogged my pores.

I took my shoes off and peered into the living room. My grandfather was asleep on the sofa, which was where he spent at least eighteen hours of his day. The television was silently playing to itself – my grandmother was always annoyed when she found the television on and nobody was watching it, yet for some reason putting it on mute appeased her.

I walked into the kitchen to pour myself a glass of water, hoping it would help to alleviate my headache. As I stood by the sink, I kept moving my feet so the linoleum wouldn’t stick to my socks. I never dared to walk about the flat barefoot, and even if I sat at the dining table I kept my feet elevated so as not to fuse with it.

“What the hell happened to you?”

I flinched. My grandmother slid from the shadows and appeared at the doorway. When I didn’t say anything she sidled up beside me, and I thought she was going to push past me to get to the sink. Instead she slapped the side of my head and I yelped.

“Serves you right. What the hell have you been going around doing?”

“Someone threw a golf ball at me,” I muttered.

It was the first thing I could think of, and if I had told her it had been an accident, she wouldn’t have believed me.

“Idiot,” she said, and sat down at the table. I knew she wasn’t in the kitchen for any good reason. Sometimes she chose to occupy the same space as me simply to let me know I was in her home.

I quickly bade her goodnight – she had thrown a shoe at me the last time I had left a room without addressing her – and went into the bathroom to clean myself up before bed.

My first instinct when I saw myself in the mirror was to laugh. The lump on the side of my head was comically large, and if I’d seen it recreated in a movie I would have mocked the makeup for looking unrealistic. Ironically it was same size as a golf ball.

But the amount of blood spattered all over my hair, face and clothes made it a little less amusing, mainly because it was going to be difficult to get out. Even just thinking about pulling clumps of congealed blood from the hair covering my extremely sensitive scalp made me wince, which in turn caused a pulsating pain to radiate through my skull. I soaked a flannel in cold water and laid it on the side of my head. The relief was so intense I unintentionally moaned out loud.

“What are you doing in there? You better not be touching yourself, you disgusting boy.”

I decided to clean as much as I could as quickly as possible and leave the rest to the next morning. I hoped by then it would be dry and crusted. Easier to scrape out.

My bedroom had been ransacked again. My grandmother thought I hid things from her, or stole the things she had misplaced. She never blamed me outright, just tore through my stuff until her anger had been satiated. From the way she threw everything across the room I guessed she wasn’t actually trying to find anything – it was just the activity, the intent that she focused on. I could understand that

I spent a couple of minutes folding things and putting some of my notes back in order. I wasn’t worried about my grandmother finding out about Joe and everything I had written about him. It’s not the kind of thing she would have wanted to react to, even if she had decided to sit down and read about it.

That night I couldn’t sleep. In fact, I wasn’t able to sleep for days afterwards, even though I was exhausted. The headaches began to fade and the lump shrunk, but a sick, anxious feeling in the pit of my stomach just wouldn’t go. Whenever I began to drift off, my heart would start to hammer in my chest and I had to get up and pace around in my room to slow it.

It took me weeks to realise why it was happening, even though it was so obvious. It was so I wouldn’t forget. His grin, telling me I had lost – I had to finish what I had started.

So I began to plan.

The first thing I did was pick things up with Kay again. He seemed neither pleased nor annoyed by our rekindled friendship, because he knew we only spent time together out of necessity. He for lack of other options, and me because people always stand out more when they’re alone.

Although I hadn’t talked to or even been near Joe since the incident at his house, I began to actively avoid him. I sat as far away from him as I could in class. I ate lunch on the benches outside or in the toilets. I timed it so I never ran into him in the hallway. If we had to be in the same room, there would be no eye contact and I would try and have my back to him if possible.

It was hard at first. Habits are hard to break. But it slowly got easier, even though I really, really wanted to see if he was looking out for me, checking over his shoulder to see if I was watching or waiting. It was almost too tempting at times.

Months and months passed, and then school ended. In that time, I only permitted myself one look – and that was the day of the prom. I showed up late in the clothes I always wore outside of school, and I watched the kids I’d spent the past five years or so avoiding as they gabbled and guffawed together. They spoke as if that day would be the most important of their lives. Who knows, maybe it would be.

Then I spotted him, sipping on a drink in the corner with the girl he had taken as his date. She was chatting away to him, but he wasn’t looking at her. He was just staring off into the distance. Part of me wanted him to look up and see me, for us to exchange some sort of meaningful last glance, but he didn’t. I left.

That summer Joe received fairly good exam results and went on to college in September. He did pretty well there and enrolled at a fairly decent university in the city. For three years he studied, went on casual dates and played rugby for a team that won most of its matches.

When he left university, he stayed in the city after being accepted on a graduate scheme. He rented a flat with a few friends and eventually was given a permanent job. He left after two years and got a slightly better job. He was there for three years before moving on to another slightly better job.

He moved out of his flat and into another with a few colleagues. Then he met a girl, and this relationship lasted longer than any of his others. They dated for two years before moving in together. Three years after that he proposed. They were engaged for a year.

They’re getting married. Today. In an hour. Just round the corner from where I am now.

He didn’t recognise me at all when he hired me. I have a beard now and I’ve put on a lot of weight, but I still can’t believe he shook my hand and we spoke for thirty minutes and he knew nothing. I was happy going in, I wouldn’t have minded if he guessed it was me. He wouldn’t have made a scene either way, not with Hannah sitting right next to him. I know him too well. But in the end, he didn’t recognise me. And I’m a cheap photographer with an impressive portfolio, which is difficult to say no to when your organising a wedding on a budget. They signed the contract.

And here we are.

I’m getting ahead of myself. I need to focus.

Thank you for reading Average Joe! If you’re looking for part one, it’s here.

You can also buy my novel, These Unnatural Men, on Amazon and Kobo.