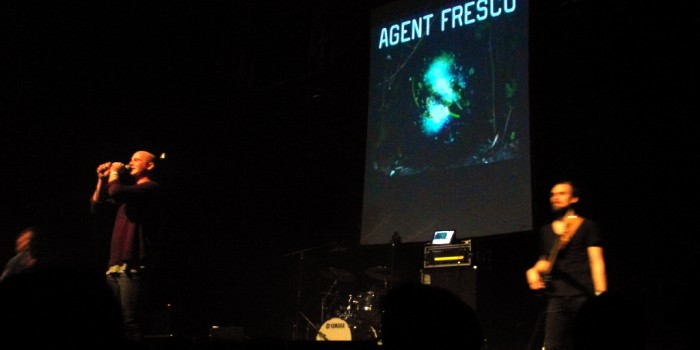 I really didn’t enjoy this band but didn’t show my true feelings during the concert as there were a lot of hardcore fans in the audience. I felt my safety may have been compromised by the many lyric screamers behind me, so have only voiced this opinion now that I’m safely back in the UK.

Agent Fresco was…interesting. Apparently they started off as an experiment on the side of other music projects, but I don’t think the experiment quite worked. I wasn’t a fan of the lead singer’s voice or the fact that he was performing to the side of the stage instead of out at the crowd. I also detested the bassist’s ridiculously smug and grotesque facial expressions that he repeatedly pulled while strumming his guitar in a perverted fashion; I really felt like he was raping the audience with his eyes. Instrumentally the bad was fairly decent, but they didn’t mesh well as a whole.

Agent Fresco seem to have a decent enough fanbase so I doubt they’d particularly care that I disliked them so much, but personally I think they really were the crappest band at Iceland Airwaves and a blip on an otherwise perfect festival.